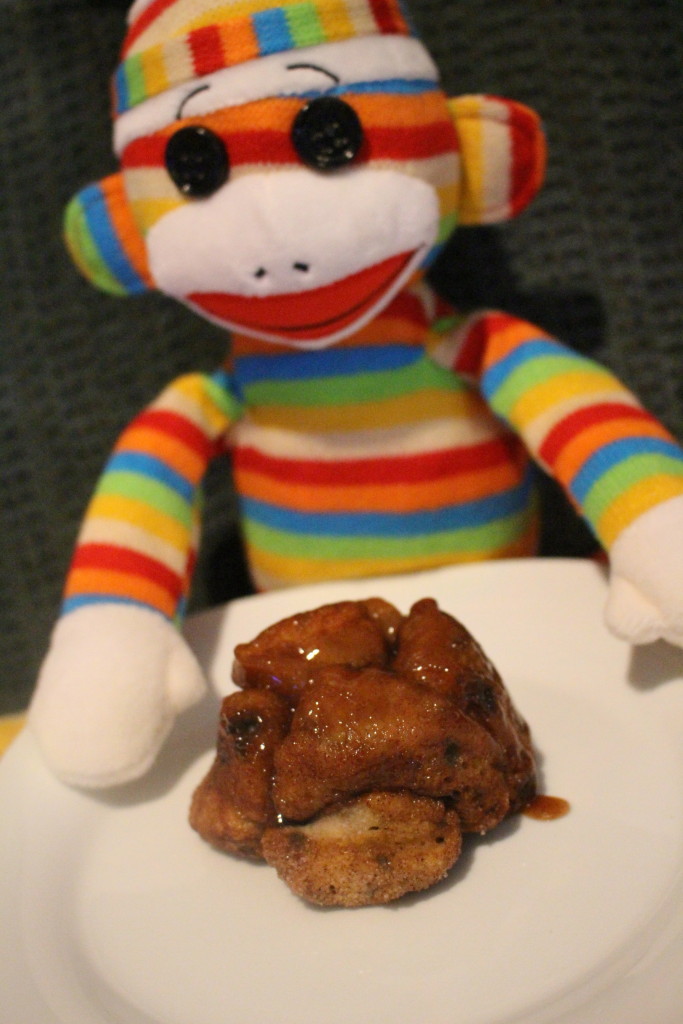 So it has been five weeks since surgery and everything is going as expected. I am still taking it easy and am getting a little stir crazy trying to fill my days around the house. I’ve had plenty of time to do crafts, read about food and watch copious amounts of television.

The hardest part is probably the seclusion. I’ve had some friends pop over and the joy of my mom hanging out with me on occasion but a majority of the time my days are spent alone. (This is where you should say “Awwwww.”)

My sweetie pie is at work during the day so when I am lonely I have resorted to finding company the only way a rational adult on pain medication knows how…I talk to my stuffed monkey, Crazy Eyes! 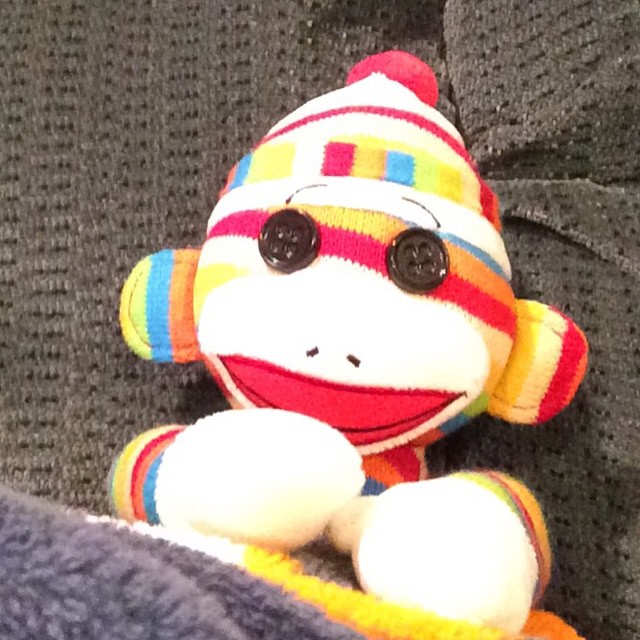 Crazy Eyes came home with me from the hospital. (Earl always buys me a stuffed monkey when I’m in the hospital.) I must say I wasn’t too attached to him at first. I had never seen such a colorful monkey and I will admit….I judged him for being different.

But once we got home and I realized that he was by my side day and night, my affection for him grew. There was just something about looking at his bright face and button eyes that made me smile. Most importantly, he magically took away some of my loneliness.

His personality is only limited by my imagination. Crazy Eyes loves to be under a blanket and likes to be close to me at all times. He doesn’t like scary movies but loves Animal Planet. He doesn’t eat much and never goes to the bathroom.

Crazy Eyes loves to joke around too and make fun of Earl. He caught Earl tearing up at a TV show the other day and really let him have it. It was just hysterical!!!! (Earl did not find it as funny and said we were both heartless and mean.)

So yesterday we were hanging out and I was trying to figure out what to make for dinner. I wasn’t feeling great so I wanted something easy.   Crazy Eyes said I should just make breakfast food for dinner. (He really has a lot of great thoughts in his little stuffed head.)

I thought that sounded great but I really like some sort of bread or muffin with breakfast and didn’t have anything in the house. Crazy Eyes said he had the perfect solution. I jumped in before he could say anything else and guessed “banana bread.”  He was sooooo offended. I guess just because he is a monkey doesn’t mean he likes bananas. Crazy Eyes thought it was a bit rude of me to come to that conclusion.

I felt horrible. I gave him a big squeeze and said that I was sorry. After he calmed down and fanned the tears from his buttons, he sighed. He looked up at me and said that he accepted my apology. (Phew!)

Crazy Eyes then told me that he thought monkey bread is a nice addition to breakfast. Yum! I love monkey bread. Does this monkey know me or what???

The only problem, homemade monkey bread is a lot of work. Crazy Eyes said he could do it and we pulled out the Mixmaster. It was an instant fail. 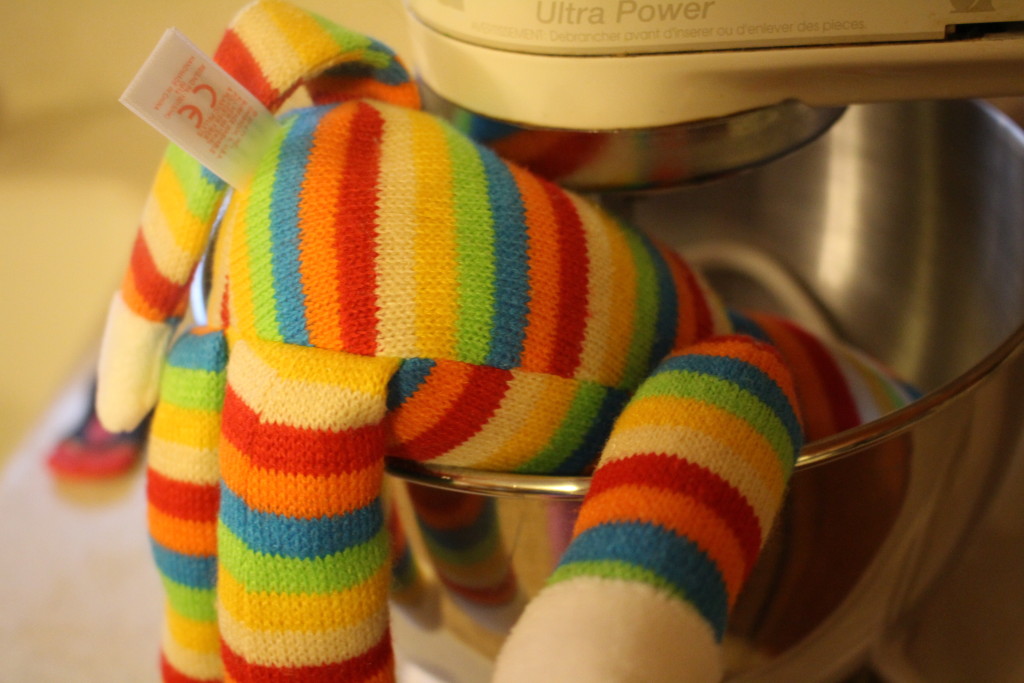 So Crazy Eyes did the next best thing…..he called up his friend, The Doughboy, and got a suggestion to just use refrigerated biscuit dough. The Doughboy said his recipe was so simple that even human could make it. (Oh did those two laugh at that joke.)

We ran to the store and found out that Pillsbury had blueberry biscuit dough and thought that would be a great option. (Crazy Eyes may not be a fan of bananas but he loves blueberries.) 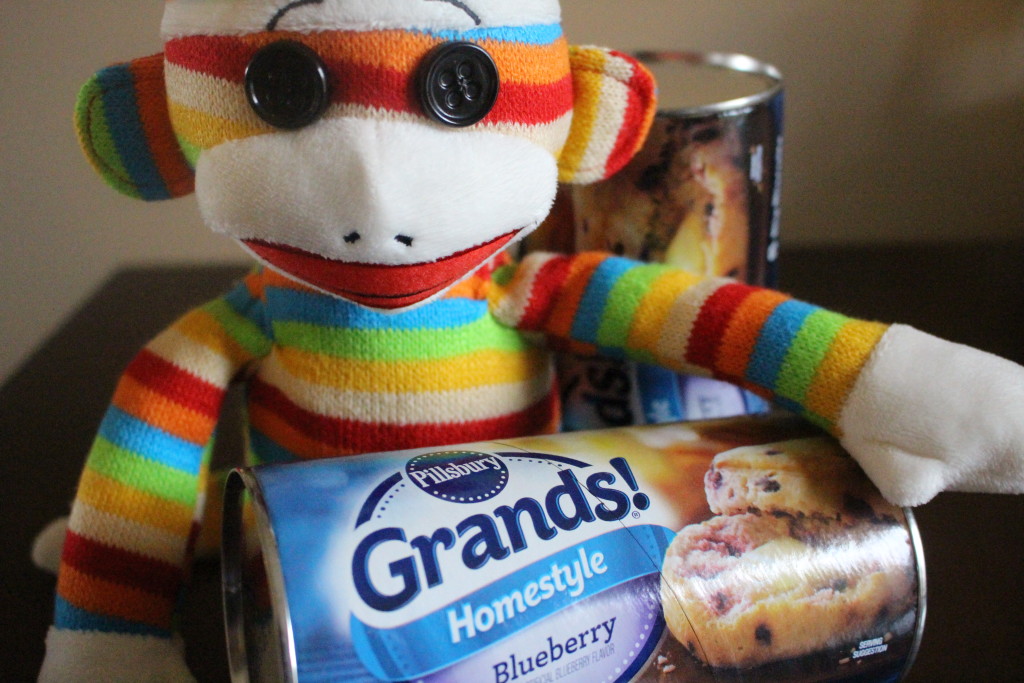 I sat back on the couch and let Crazy Eyes do his thing. He made a nice butter sugary topping for the bread with just butter and brown sugar. 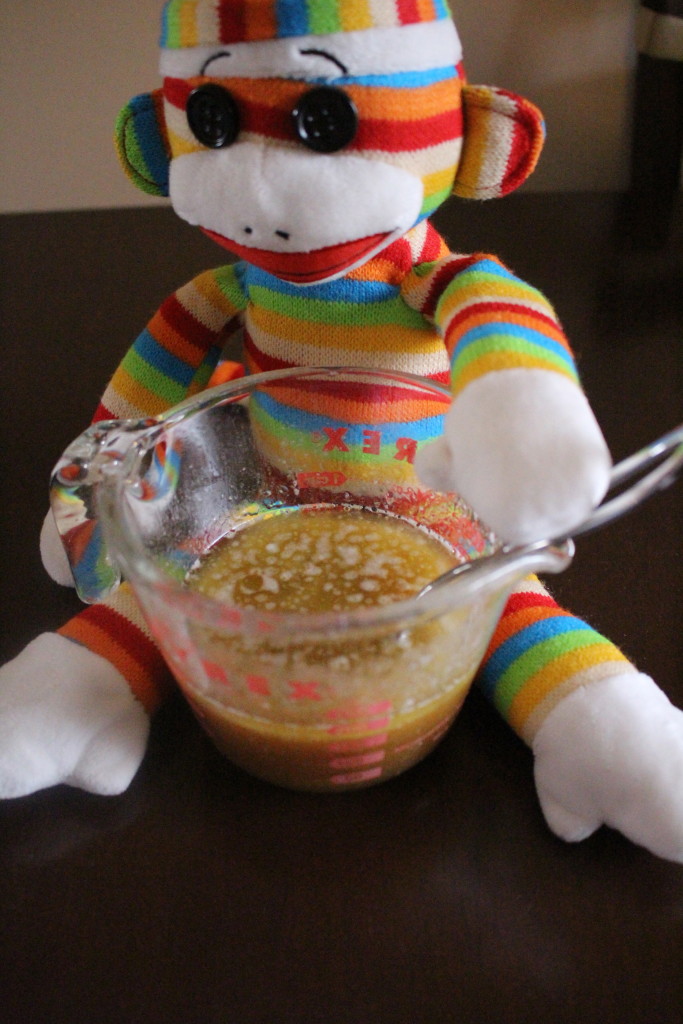 He also decided that he wanted to make individual portion sizes so he made it in a muffin pan. Crazy Eyes says that this way is better because then you don’t end up with some super gooey chunks in the middle that don’t taste fully cooked. 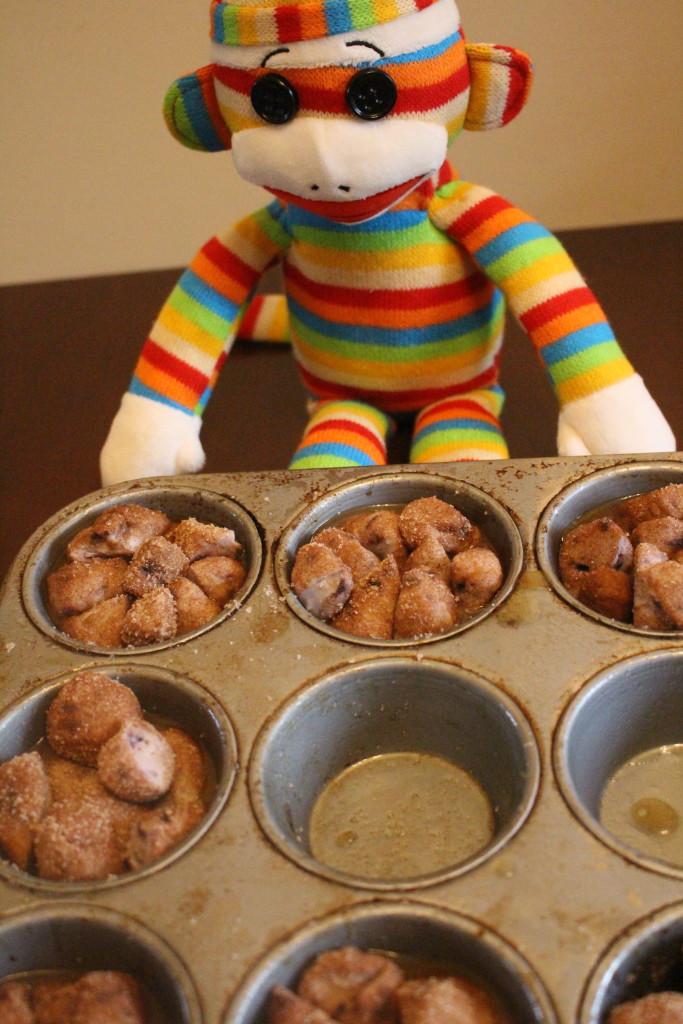 And I’ve gotta hand it to Crazy Eyes…his Monkey Bread was awesome. It had a lot of flavor and just the right amount of gooey goodness.

As I get stronger every day, I wonder how our friendship is going to change when I start living in the real world again. I know it is not reasonable for a grown woman to carry a stuffed monkey around with her everywhere she goes. I do know that I will look back on these weeks as a fun time to have just been silly and enjoying a very real friendship with a very pretend monkey.

Separate the muffins in the can and divide the portions in half. Cut half of those portions into quarter size pieces meaning cut one muffin into four. And then take the remaining whole muffins and cut into 6 pieces each.

In a bag or bowl, mix white sugar and cinnamon. Roll the cut pieces in this mixture until they are all coated.

In a separate bowl, mix brown sugar with melted butter.

Using a 12 count muffin tin, spray the holes with nonstick spray. Using only the 10 spots on the perimeter of the tin, fill them with approximately 1 Tablespoon each of the melted butter/sugar mixture.

Evenly divide the biscuit pieces into the holes. It isn’t perfect math so just judge it with your eyes.

Bake for 14 minutes and check. The biscuit dough should feel dry but not hard to your touch. If it is really mushy, cook a smidge longer.

When it is done to your satisfaction, remove from oven and flip over onto a baking sheet or tray. Ta-Dah.

I’m not sure if Crazy Eyes will be helping me any more in the kitchen. He made a mess. When I tried to get him to wash off the counter, all the water got sucked up into his body so now he feels bloated.

I am sure that this was a tasty little breakfast treat and it would be an easy fix for company or on a day you just feel like feeding your inner monkey. 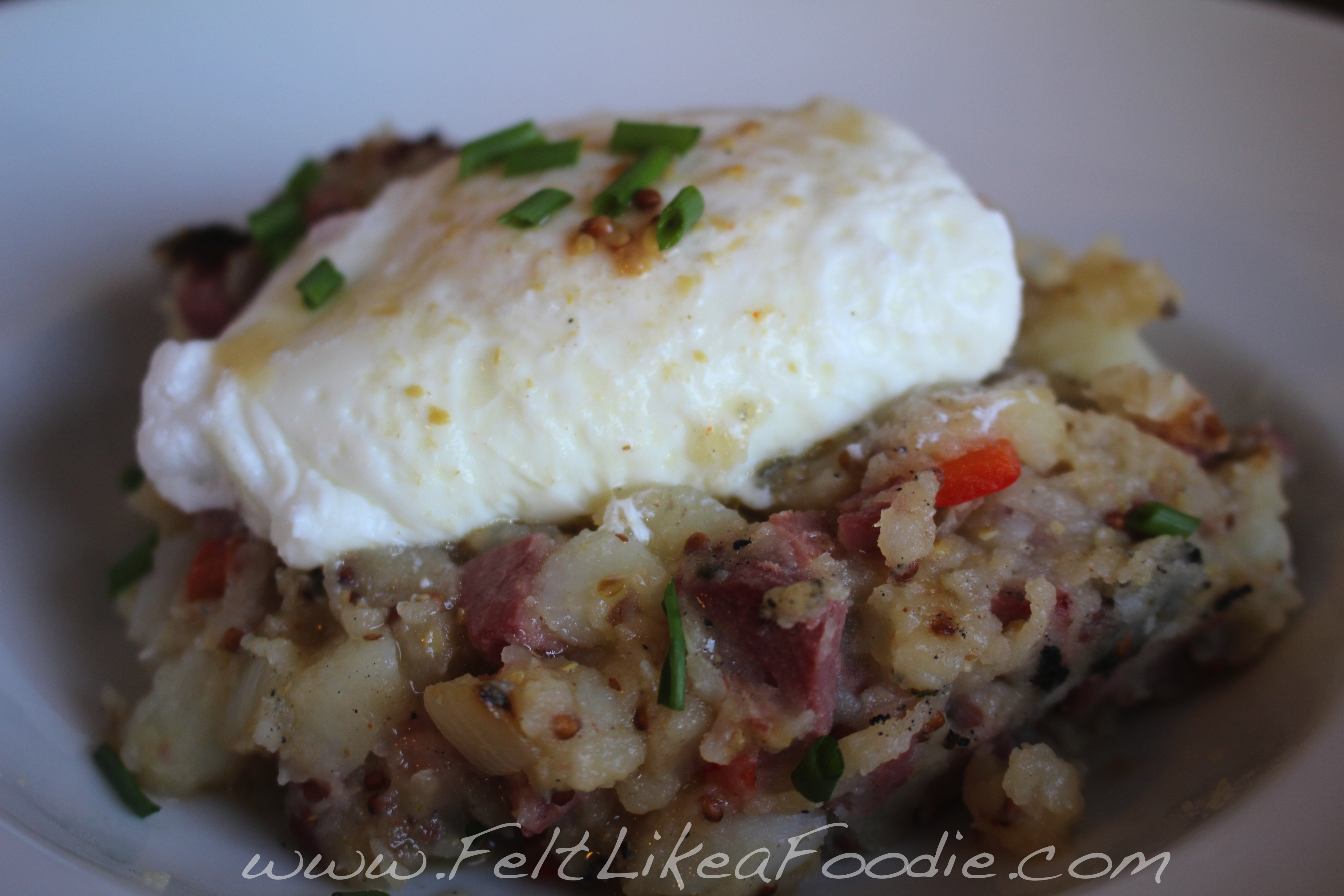 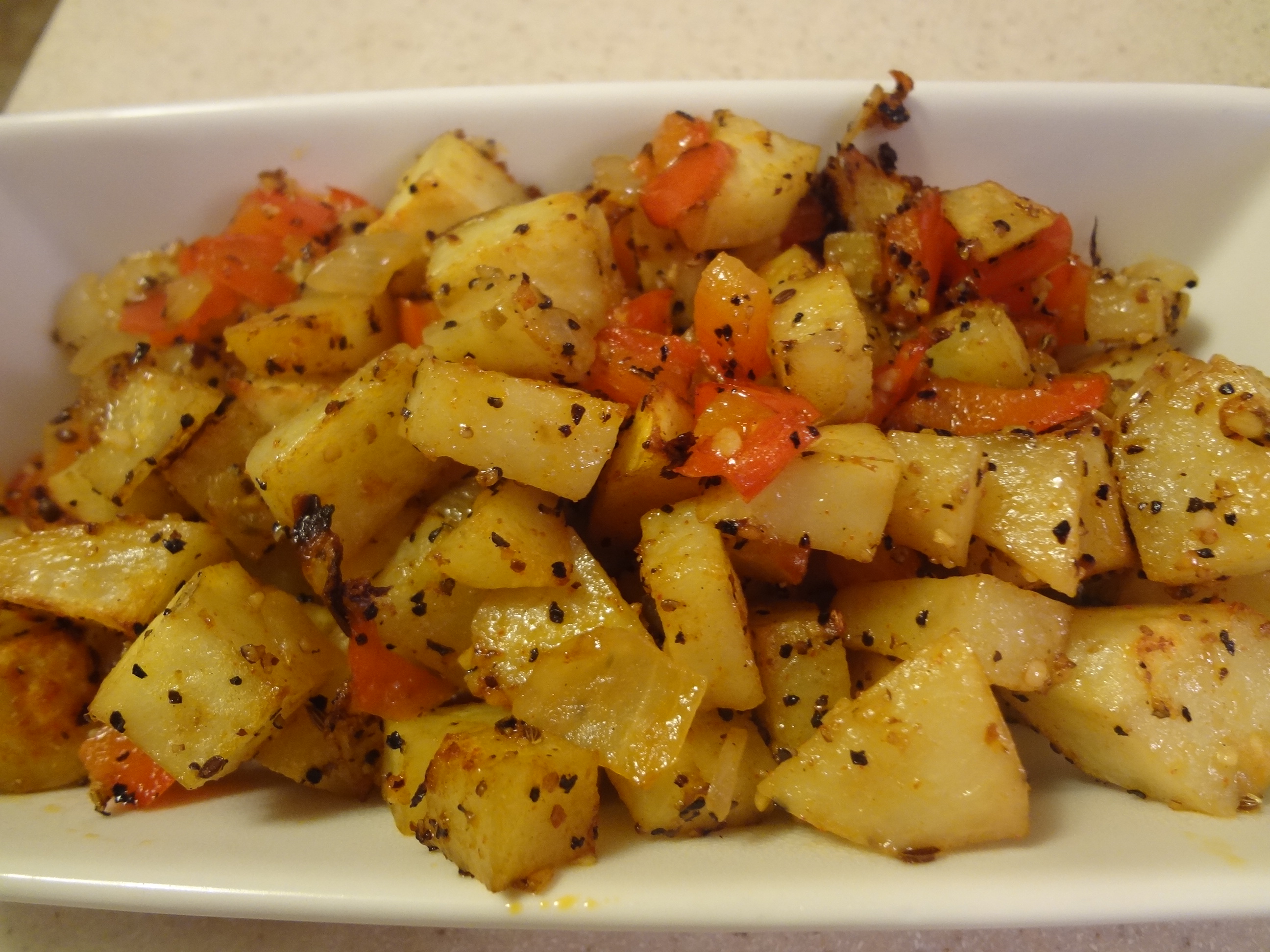 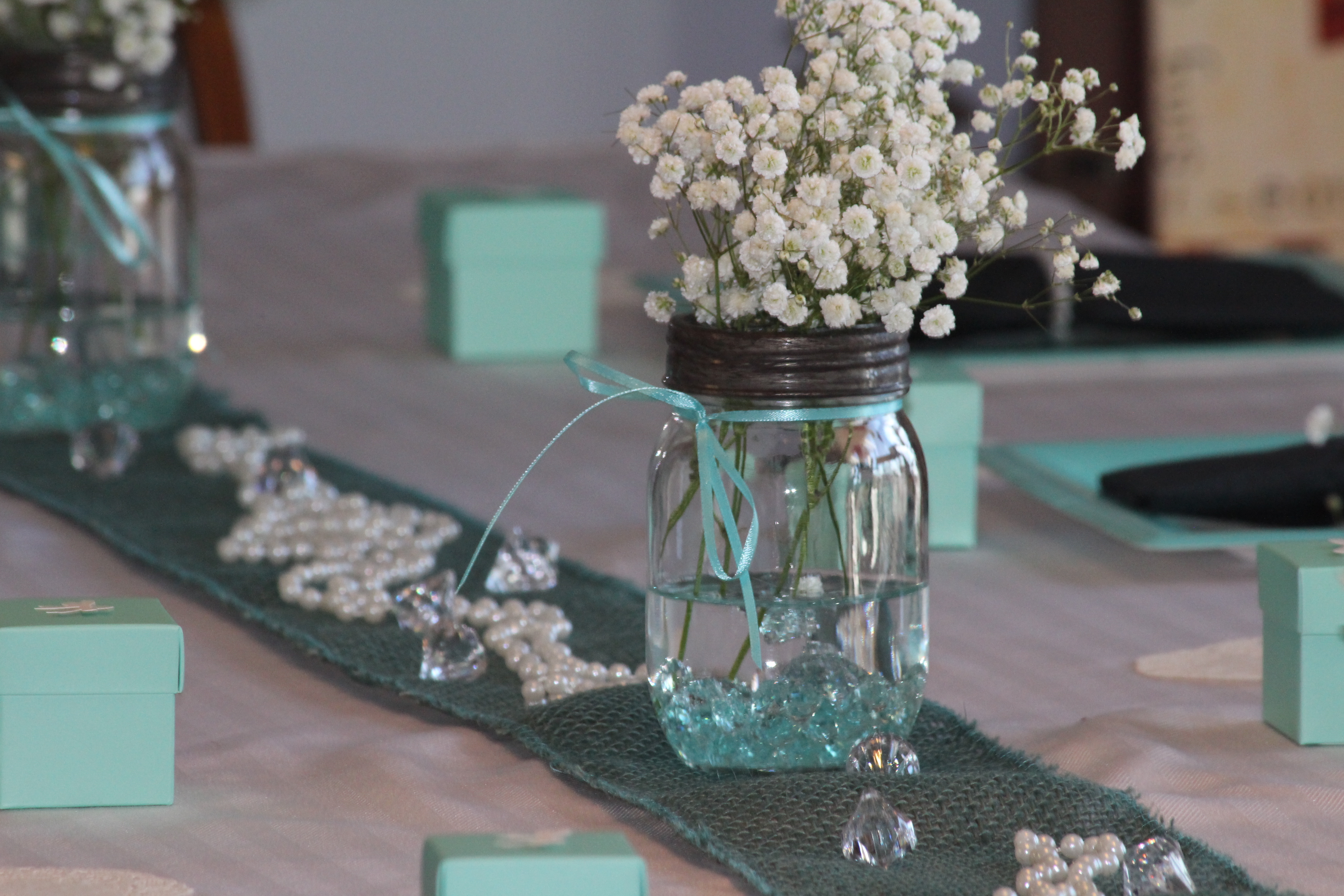